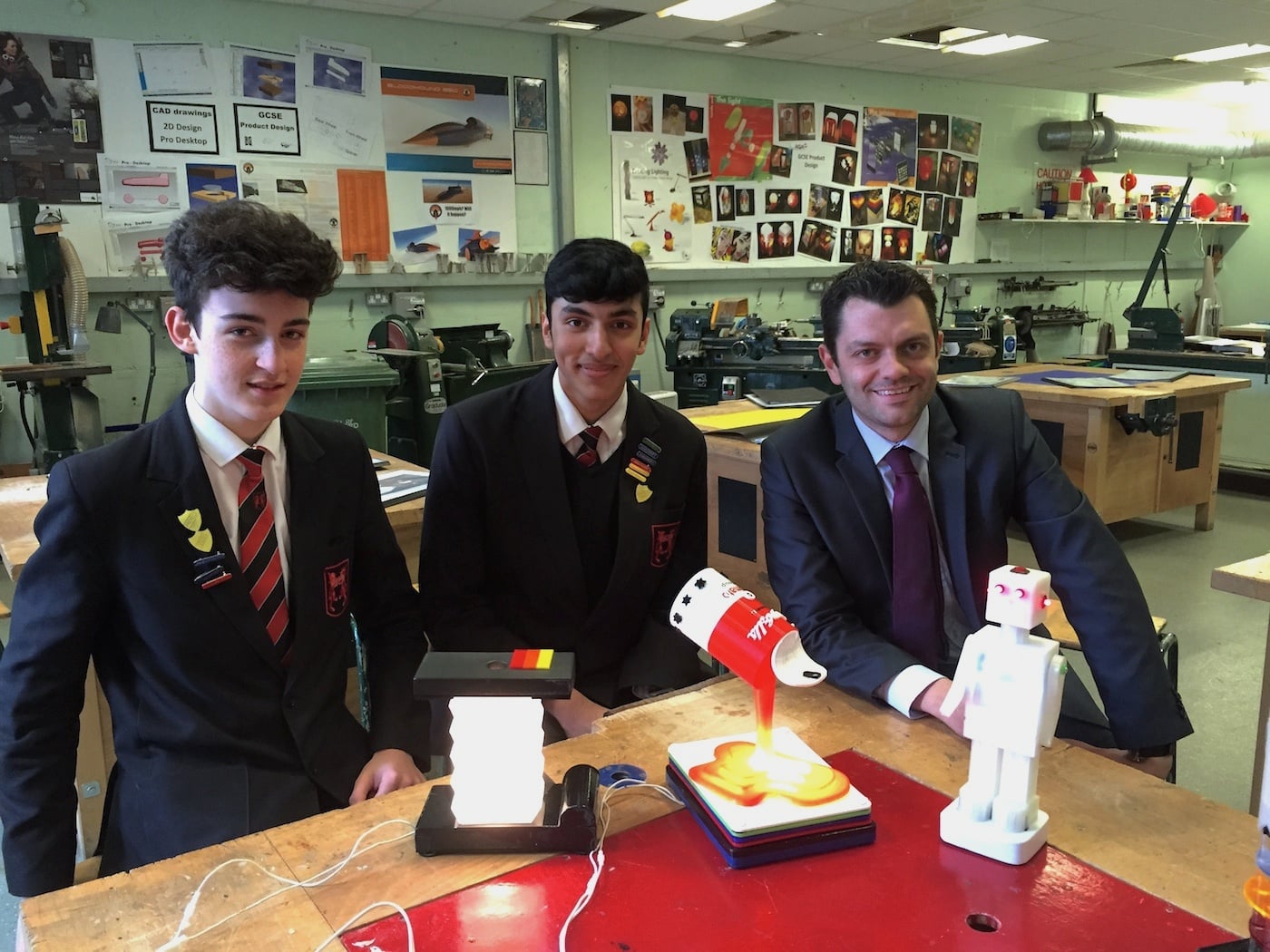 Today we’re pleased to bring you part one of a special, two-part interview with Phil Cotton, an award-winning 3D printing educator in the UK.

Phil teaches 3D printing in design and technology at Ladybridge High School in Manchester, runs 3D printing workshops at the University of Manchester for undergraduate teachers, is a learning consultant for the BBC, has won 3D Printshow’s Educational Excellence Award for the past two consecutive years, and is also the founder of 3D Filemarket, which shares 3D design files for 3D printing.

Question 1: What was the process for obtaining your first 3D printer in the classroom?

“To get the 3d printer I had to put together a bid to the head teacher and the governors explaining why I wanted the technology. I basically outlined that this would be massive in the future of education and there was an opportunity to start at the beginning. It would mean the school and the students would have a head start with the technology and ultimately their education would be enhanced through 3d printing. The main factor I always consider in class is ‘how will this benefit lessons and children’s learning?’ In this case 3d printing was the clear direction to go in.”

Question 2: How did you go about introducing design and 3D printing in the classroom?

“Introducing 3d printing to the classroom took some time… I first started teaching 3d printing about four years ago and back then there was very little information about the technology and virtually none in the education world. When the 3d printer arrived it came with an instruction booklet and that was it.

“I had to spend the next few months getting to know the machine and learning the technology myself. Then I had to think how I would fit it into the classroom. As there was no one else I knew who was teaching 3dprinting in the classroom, I had no guidance on what to teach and had to go with my ‘gut’ feeling of what would work.”

Question 3: Given the lack of teaching resources available then, what did you do for your first lesson in 3D printing

“When I first demonstrated the 3d printer to the students, I printed an iphone case during a lesson and they were so impressed with the technology that they wanted to design their own cases. So there was my first lesson with the kids…. How to design and 3d print an iphone case.

“The students really helped dictate how it would work as there was no guidance at all about using 3d printing in the classroom. Part of this first project was teaching the children 3D cad modelling skills and then how to apply the skills to design a useable product. They loved it and a buzz went around the school that Mr Cotton was teaching the children how to make iphone cases. Since then there has been no looking back and it has grown from strength to strength with more and more children accessing the technology.”

4) What are some of the benefits of using 3D printing in the classroom?

“It teaches children that it is OK to make mistakes. On many occasions students would print their designs and realise that it was not quite right – maybe a hole needed to be 2mm smaller or a chamfer angle needed adjusting. This could been seen as mistakes but actually they are valuable learning experiences and would mean the students would then have to alter their CAD designs and then re-print.

“This is exactly how real life everyday products are designed. I link it back to James Dyson and the development of his first bag less vacuum cleaner, he had to make over 5,000 prototypes before he got it right and this is normal for design engineers. It’s almost impossible to design something and get it right first time so the experience is not one of failure, but one of learning and real life. This then encourages perseverance and a determination to succeed as they want to get their designs right, even if it does take multiple attempts.

“As well as this 3dprinting enables students to learn about maths and the application of maths to their designs e.g. if they want to work accurately and to a tolerance then maths is core of the designing process and the more children are exposed to the application of maths in real life contexts the better. Then there is the study of science and the materials that are used and also how they behave when they are melted through an extruder.

“Furthermore, there are the social and environmental issues regarding 3dprinting. The use of PLA instead of ABS for printing is good for the environment as it’s made from corn instead of oil, but imagine if this became the main way of producing plastics? Corn would become as valuable as oil and that would raise the price significantly, resulting in many third world countries where communities rely on corn as a food substance suffering because of this.

“Then there are the manufacturing issues related with 3dprinting. If we all had one in our house and 3dprinted objects and spare parts ourselves instead of buying them from stores, this could affect manufacturing jobs around the world and also effect retail jobs if less people bought from stores. It’s combining these topics into lessons with students that makes 3dprinting such a valuable learning resource and really does encourage deep thinking. Lessons have been transformed since 3dprinting was introduced.”