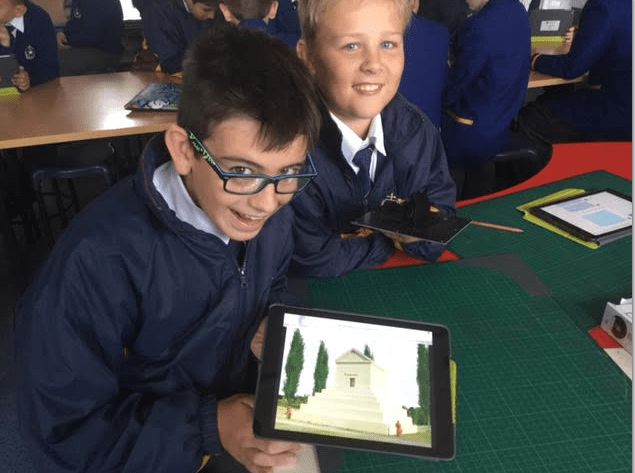 Some exciting 3D designs recently made their way across the world when Year 5 students from Nima School, Tehran, Iran got together with some Year 6 students from St Michael’s College in Adelaide, South Australia. If you would like to join this exciting program – sign up here!

The students were challenged to use their design skills to help students in another country find out more about the country they live in.

The boys in both classes began by generating as many ideas as they could about buildings and structures that have cultural and historical significance or are iconic in Iran and Australia.
From these long lists, students then narrowed them down to 5 or 6  that they thought would best help the other class to learn about Iran and Australia.

Students were now ready to get busy with Makers Empire’s 3D design app and create their models.

They researched images and information to help make their designs architecturally and spatially accurate.

Students added comments to their designs about the building they had chosen with links to more information.

Before long the Sydney Harbor Bridge was emerging as a 3D model in Tehran while the over 2500 year old Passargad Cyrus tomb was making its way to Adelaide.

It was now time to get the 2 classes together to meet each other and learn from each other.

The time zone differences made it a bit tricky but one Wednesday just as school was beginning for the day in Tehran and about to finish in Adelaide, the boys got to meet each other in a video conference.

There was lots of excitement as the boys met for the first time and could see each other holding designs that they themselves had created on the other side of the world.

Some great questions were asked and the students shared lots of useful and interesting information about their buildings.

The boys are still busy working on this project. They are doing some more research about the building designs they received from Iran and Australia  They are creating an exhibition using the 3D printed models and will connect with each other again soon to share what they have created.